With Deepest Gratitude to My Mentor, Dr. Martha A. Brown 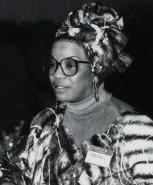 The Gifts That Dr. Brown Gave to Me

I began my teaching career as a math teacher at Forestville High School in Prince George's County, Maryland. While I was fully aware that my decision to become a teacher was motivated by a desire to serve social justice, I had no idea when I began teaching how to make that desire a reality. Dr. Martha A. Brown, who was Mathematics Supervisor of Prince George's County Public Schools (PGCPS) during the time I was there, showed me the way.

Specifically, she taught me two things which have guided me as an educator ever since. First, she taught me that what goes on in the classroom needs to be centered in our students, respect for whose intrinsic worth as human beings should guide everything we do. Our county wide math department professional development included a Summer workshop with Michael Serra, author of the constructivist textbook, Discovering Geometry. Mr. Serra spent several weeks with us over the Summer mentoring us on his teaching philosophy, which is embodied in his textbook, and which is centered on students and their needs as creative and intelligent human beings. Second, she taught me curriculum development is a proper task for a creative educator in a democratic society, and that by collaborating with colleagues within our school system we could forge solidarity and have a rich, rewarding experience that added real joy to the task of teaching math. The Summer after Michael Serra's workshop, we went even further, embarking on a project to collaboratively develop our own curriculum together as educators, with inspiration taken in part from folks like Bob Moses and The Algebra Project.

I loved working on curriculum during that Summer workshop, and I have never stopped creating and sharing curriculum materials since. I have reflected since the creation of the World Wide Web that Dr. Brown was just a few years ahead of her time. The financial and logistical challenges of distributing the materials we produced greatly hindered their successful adoption and use, even within our own school system. A few years later we would have had the Web, which could have effectively dissolved both those financial and logistical constraints.

When I first began my foray into open educational resources (OER) in 1999 - about three years before that term was coined - with the translation of Allen B. Downey's book, How to Think Like a Computer Scientist, from Java into Python, I consciously saw this activity as a continuation of the work begun with my mentor, Dr. Brown. I have on more than one occasion engaged in a bit of daydreaming about the possibility that we PGCPS educators, under Dr. Brown's leadership, could have been early pioneers in the OER community, which 25 years later is still fighting an uphill battle against neoliberalism's drive against humanization and toward the commodification of everything.

As the years have gone by, I have come to name my educational philosophy as most closely aligned with the critical pedagogy developed by Paulo Freire, but while Freire has provided me with the theory that guides my thinking, it was Dr. Martha A. Brown who gave me the encouragement, support, and hands-on experience that taught me just what a joyful and creative experience being an educator could be.

Now approaching the twilight of my career, I am about to embark on a new experience for which I will again draw inspiration from Dr. Brown. For my last 25 years as teacher of computer science in Arlington Public Schools, I have been the only CS teacher in my building, making me in essence "a department of one". With our dual-enrolled computer science programming growing at the Arlington Career Center, I will for the first time have a CS colleague and be in a department of two. I have been asked by my principal to be part of our school system's Mentor Program, and as I prepare for this new experience, I want both draw inspiration from and express my gratitude to a mentor who made such a profound difference in my life. I can only hope to be anywhere near as good a mentor to my new colleague as Dr. Brown was to me.

With love and deepest gratitude Dr. Brown, your mentee,